After a heavy snowfall, some homeowners may be concerned about whether the accumulation will cause structural damage to their roofs. While heavy snowfall can pose a dangerous risk because of the weight and potential for gutter floods and ice dams, there are a few aspects that impact whether there is a real danger. It’s important that homeowners remain safe by not trying to clear their roofs alone. Instead, they should contact Middlesex County roofers for help.

According to some structural engineers, homeowners with low-pitch roofs that are weighed down with 18 inches or more of snow might need to hire professionals to remove it. However, the Federal Emergency Management Agency advises that several factors impact snow-induced structural failures, such as roof construction, slope and shape as well as exposure to wind, maintenance and the type of snow accumulation.

Before contacting professionals to clear their snow-covered roofs, homeowners can take steps to determine whether there is a problem. According to the Institute for Business & Home Safety, they should calculate the weight capacity of their roofs and the weight of the accumulation. Most roofs can support 20 pounds per square foot, and 10 inches of fresh snow weighs about 5 pounds per square foot. This means most roofs can handle up to 40 inches of fresh snow.

However, since wet or packed snow weighs more, the IBHS notes that some roofs may only support 24 inches. Another weight calculation to consider is ice; a single inch weighs the same as 12 inches of fresh snow. Furthermore, homes that were built prior to 1975 might not have enough supportive structure, making them even more vulnerable to snow accumulation.

When homeowners calculate that there is too much snow on their roofs, they should contact roofers to clear the accumulation. Prior to beginning, the experts will complete a quick inspection to look for warning signs of damage and determine whether attempting to remove the snow will cause further structural damage. The roofers at Fortified Roofing in Middlesex County NJ can answer your questions regarding roof repairs or skylights.

Term from the roofers at Fortified Roofing in Middlesex County NJ:

Ice dams are the result of the melting and refreezing cycle following snowfall. When the temperature inside a home is warm enough, it melts the snow from underneath the roof. With low temperatures outside, the water could refreeze at the edge of the roof, creating a dam that keeps other water from flowing off.

The roofers in Middlesex County NJ from Fortified Roofing answer a common question:

Aside from calculating the weight of the snow, are there other ways to determine if there is too much snow?

If homeowners are unable to determine the capacity of their roofs, they can look for warning signs of snow-induced structural damage. Some of these signs include saggy ceiling tiles, roof leaks, jammed windows and doors, cracks in the walls, or creaking or popping sounds. Those who have attics could assess the rafters for noticeable cracks or bends. 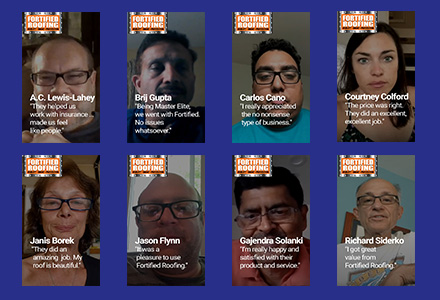